This weekend was the big weekend, my first ever Bullock Smithy, the 56 mile hike over 24 hours in the, aptly named, Peak District. I got talked into this crazy adventure back in January by a colleague. I was (am still am) raising money for Albert Kennedy Trust and Medecins Sans Frontieres.

Now, I haven't done any serious walking for years so we did some training, including the Yorkshire Three Peaks. Up until now, the furthest I'd done in a day was 26 miles (well... OK, 27 the year we walked half a mile the wrong way and 28 miles the year we walked home) as a Scout around Warrington and an unspecified but significant portion of the Lyke Wake Walk.

Well, I am now proud to say I have done 35.5 miles around the Peak District in a single day.

Yes... sadly, as those who follow me on Twitter already know, I had to drop out at Earl Sterndale. It was not a decision I wanted to make, but the reality of being so far behind schedule and knowing the next couple of sections meant it was the right decision. Obviously i'm disappointed, but I know how to count my successes here too.

I completed a Medium Length Ultra Marathon. 36 miles is a fucking long way to walk. Especially with, according to my GPS*, 1,751.5 meters of total climb and 1,531.5 metres of total descent. I climbed ONE AND THREE QUARTER KILOMETRES (over a mile) and descended nearly as much. Depending on how you define peaks, there seem to be six or seven peaks (in elevation - sometimes we crossed a "saddle" or otherwise skirted round the actual peak).

In addition, I completed the Yorkshire Three Peaks (22 miles), and several training hikes (68 miles unless I missed any).

I know I've done well even with the disappointment of not completing.

Here we all are at the start... look how young and innocent we seem... 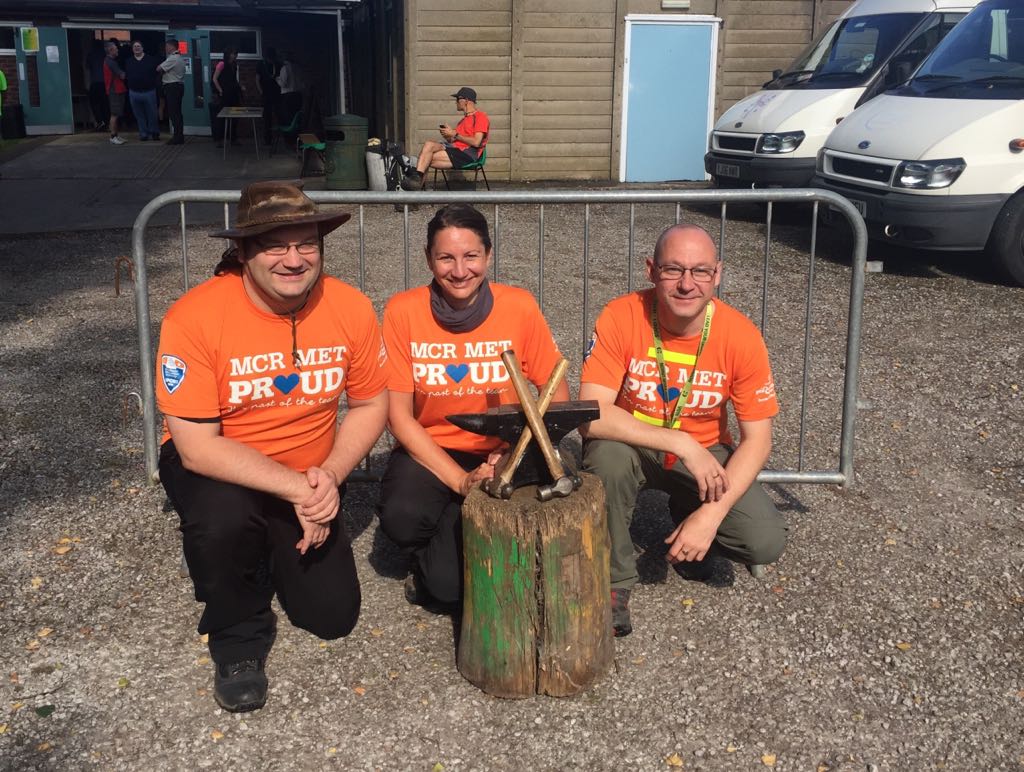 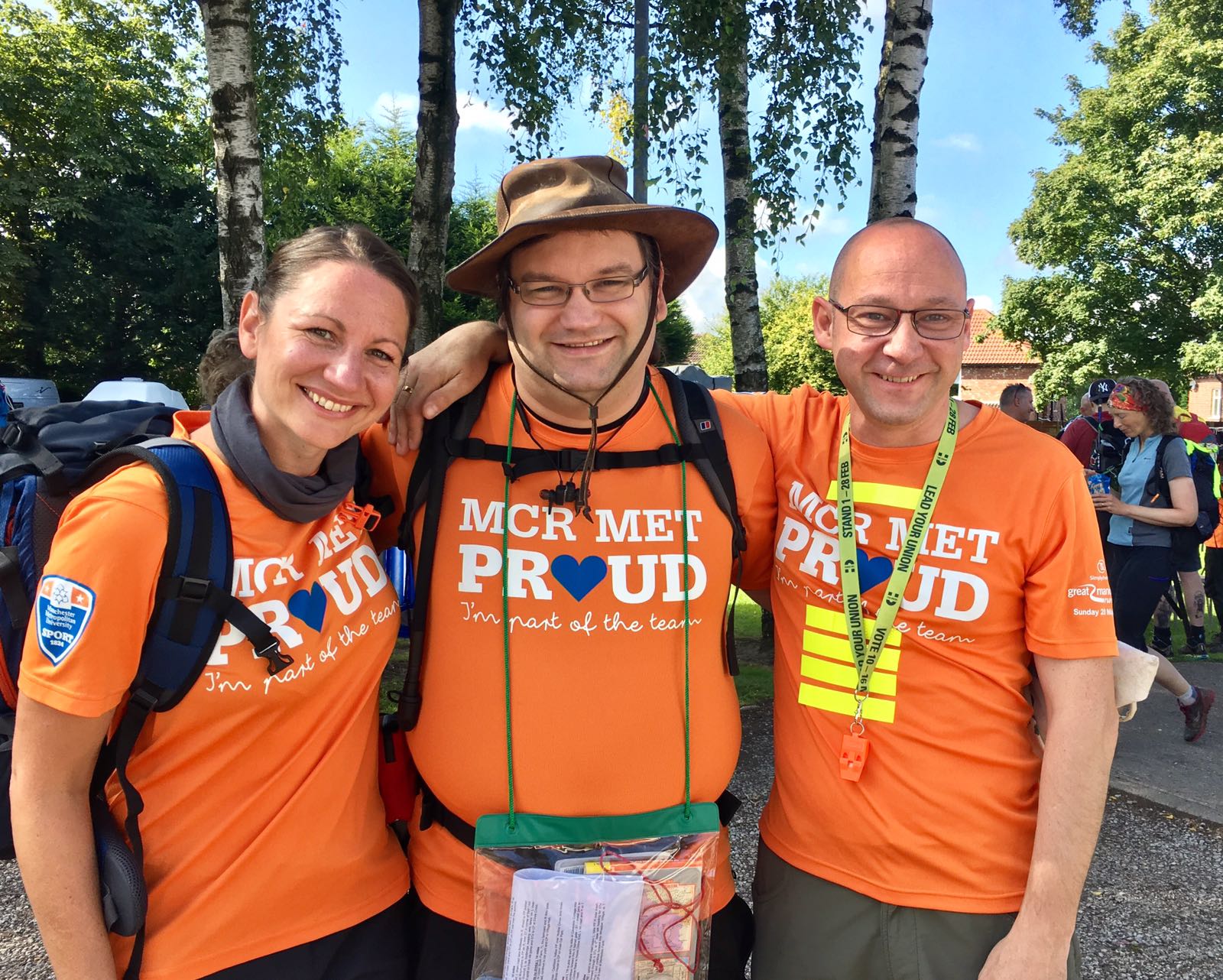 Now, the hike itself. We had lovely weather... perhaps a bit too lovely if I'm honest. I had to lose my trousers at the first checkpoint. I was unsure whether my shorts were decent or not but at that point all decorum went out the window as the heat became the overriding factor. After that, fear of taking my boots off again meant that I stayed in them way past the bitter end... We were already about 20 minutes behind our target time here, but we weren't the back of the pack. Glenda and Paul were already setting a pace I wasn't matching. Hills... eugh.

Chinley Churn, again, Glenda and Paul leaving me in the dust. It was much nicer in proper sunlight than the drizzly conditions we'd endured on the training walks. At this point I'm dragging us to 40 minutes behind. Off to Edale Cross and we fall in with a group leading us over a "shortcut". This is actually the described "official suggested route" but we had failed to find it on previous reccies and thought the route looked dangerous. This took a lot out of me in the end - both physically and mentally. It was not a fun shortcut and then everyone had disappeared when I got to a "which way" moment.

On the climb up to Edale Cross I had to tell Glenda and Paul to just make their own pace. Worrying about holding them back was taking a whole load of energy I couldn't afford. I fell further and further behind until eventually reaching Edale Cross with enthusiastic marshals and Jelly Babies!! And then I got my music working and it was downhill. And I started overtaking people. I shaved a whole five minutes off the target time for the Edale Cross to Edale section going from 1 hour 6 minutes behind to 1 hour 1 minutes behind... Great stuff.

I rested a bit at Edale and latched onto another group so ended up resting slightly longer. I was much more successful with this group but at Castleton I was back to 1 hour 14 minutes behind schedule. But this section included Hollins Cross at sunset... 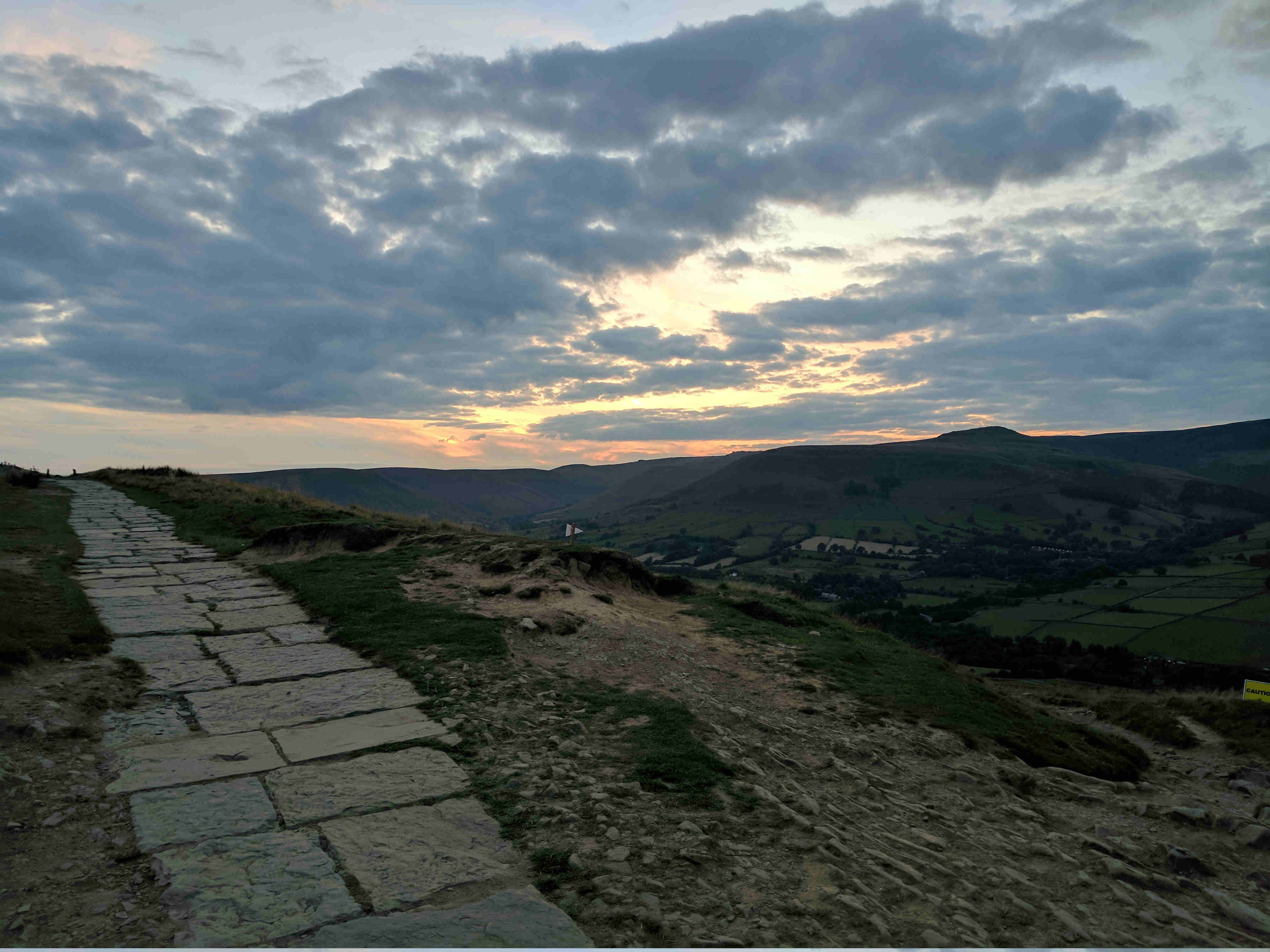 Out of Castleton and up through Cave Dale and on to Peak Forest. This was the only section of the route (other than a short bit up to Chinley Churn) I hadn't actually done so I was glad to be walking with people who did know it. Cave Dale must be lovely in the daytime... At night and with warnings of a mountain bike event coming down the route we were walking it was... interesting. In the end we only had 10 of the threatened bikes as only the front of the pack had reached the section we were walking.

At Peak Forest and 1 hour 37 minutes behind schedule, we enjoyed a brief respite in an indoor check point before heading out yet again. I didn't dare take my boots off so despite it cooling down as night was well and truly on us, I opted to remain trouserless... 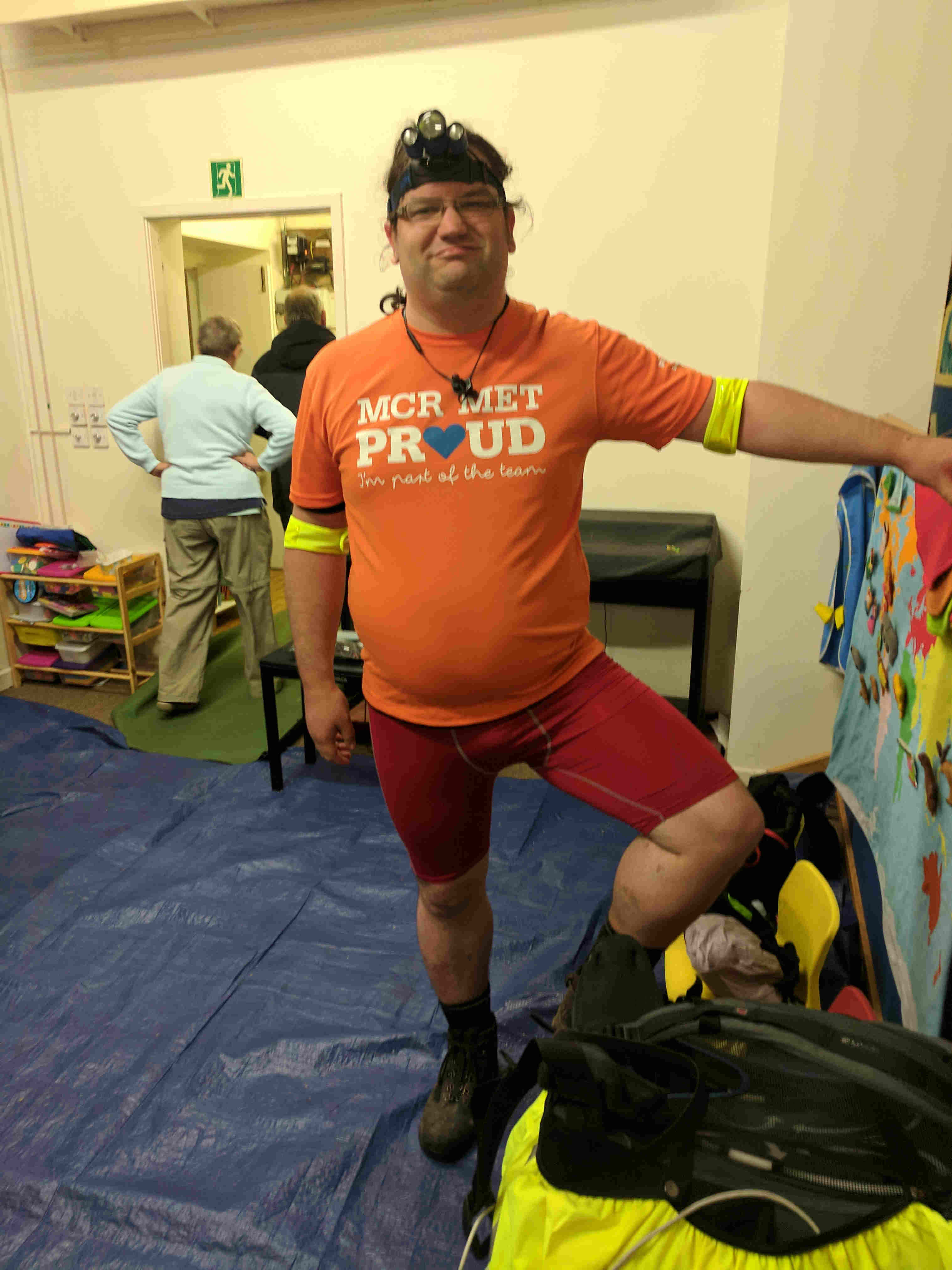 On to Millers Dale and a most welcome cup of soup. After this, myself and Jane (Jenny? Janet?) set out with the sweeper team as our group had separated leaving just the two of us. So far behind schedule (1 hour 40), the thought of giving in was entering my head - especially as Jane was struggling on this bit. At Chelmorton I was about 2 hours behind schedule and the sweeper team acknowledged the chance of completing in the 24 hours was not going to happen with our current pace. We decided to go on the "easy" section to Earl Sterndale and re-assess. Unfortunately, my body and mind got the wrong signal and decided we were retiring already - before we reached the checkpoint even. The "easy" section to Earl Sterndale was therefore anything but easy. Jane seemed to be better on this section but we both pulled out at Earl Sterndale - 2 hours 18 minutes behind a "schedule" with only 50 minutes wriggle room. I thought about continuing to Brand Top, but it wasn't the thought of the steep climb to Brand Top (that you can just put your back into) but the thought of the slog climb to Stroop farm just screamed "Nope!" at me. 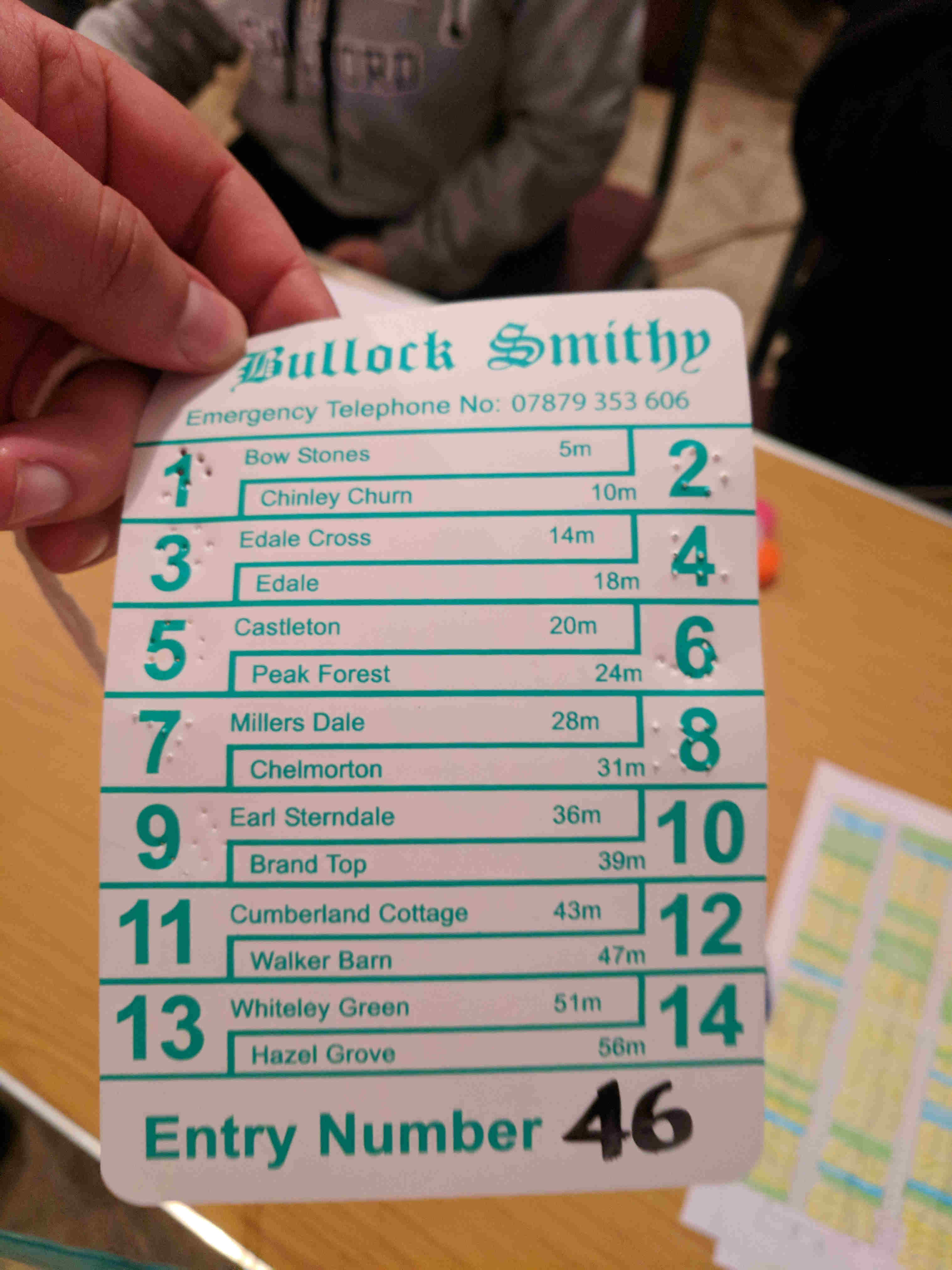 I, again, want to express just how difficult this was, Jane is an experienced 50 mile walker - she usually does the Lakeland 50 mile hike (and has done the Lakeland 100 mile) - and she was struggling with it. The density of the hills at the start I think was the biggest factor. Her step-daughter, also quite experienced, pulled out back at Edale. So, this was a hard walk even by hard walk standards.

All of which makes Glenda and Paul's achievement even more spectacular. They did the whole route in 23 hours and 31 minutes. I am so, so proud of them. They may actually have completed more than 56 miles as they missed a turning and took an even longer route to the end point.

I did try and walk down to meet Glenda and Paul but my mind was writing cheques my body couldn't cash and their detour meant it didn't happen so my parents rescued me from the side of the road and I was able to meet them as they came in. 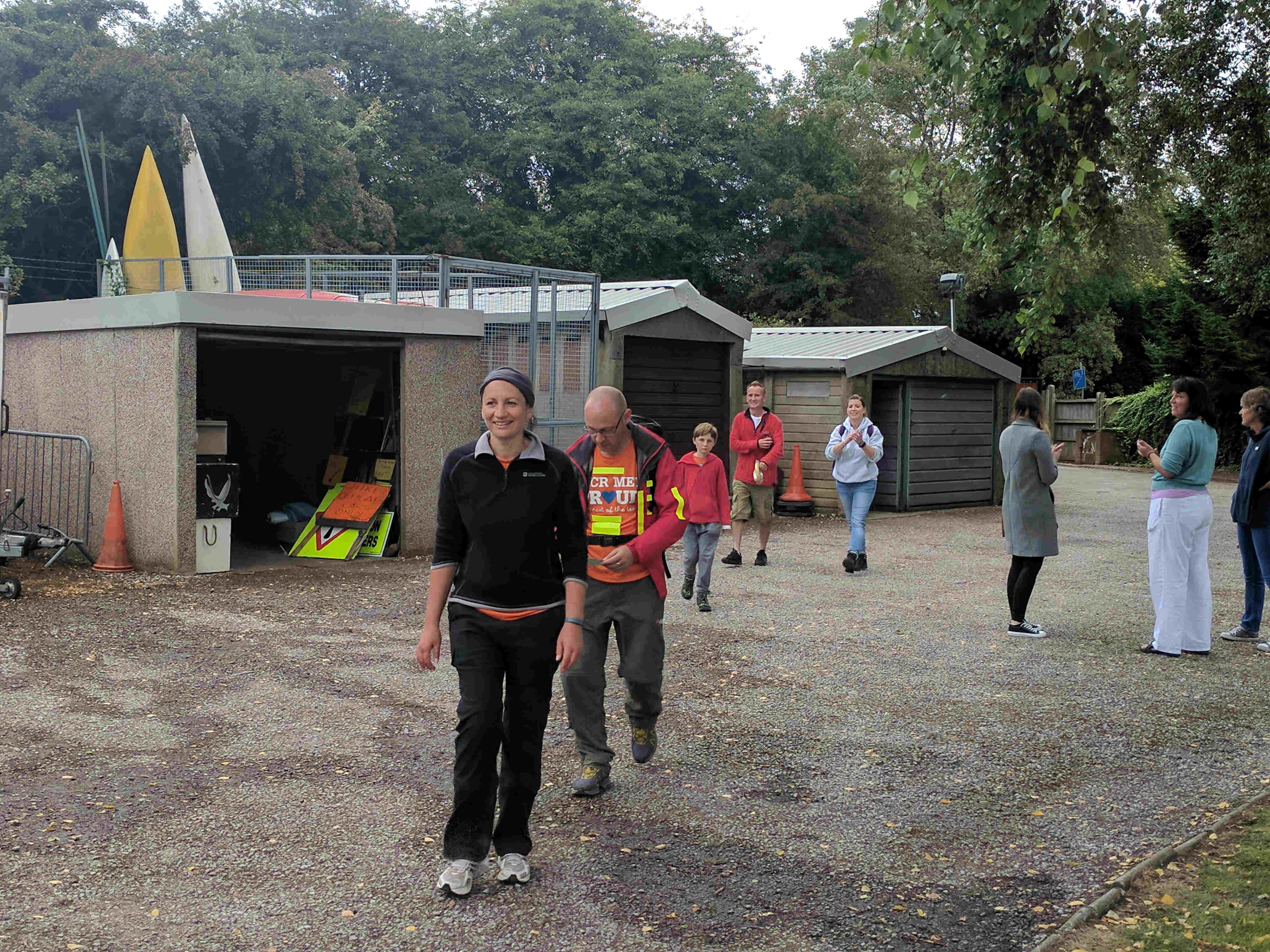 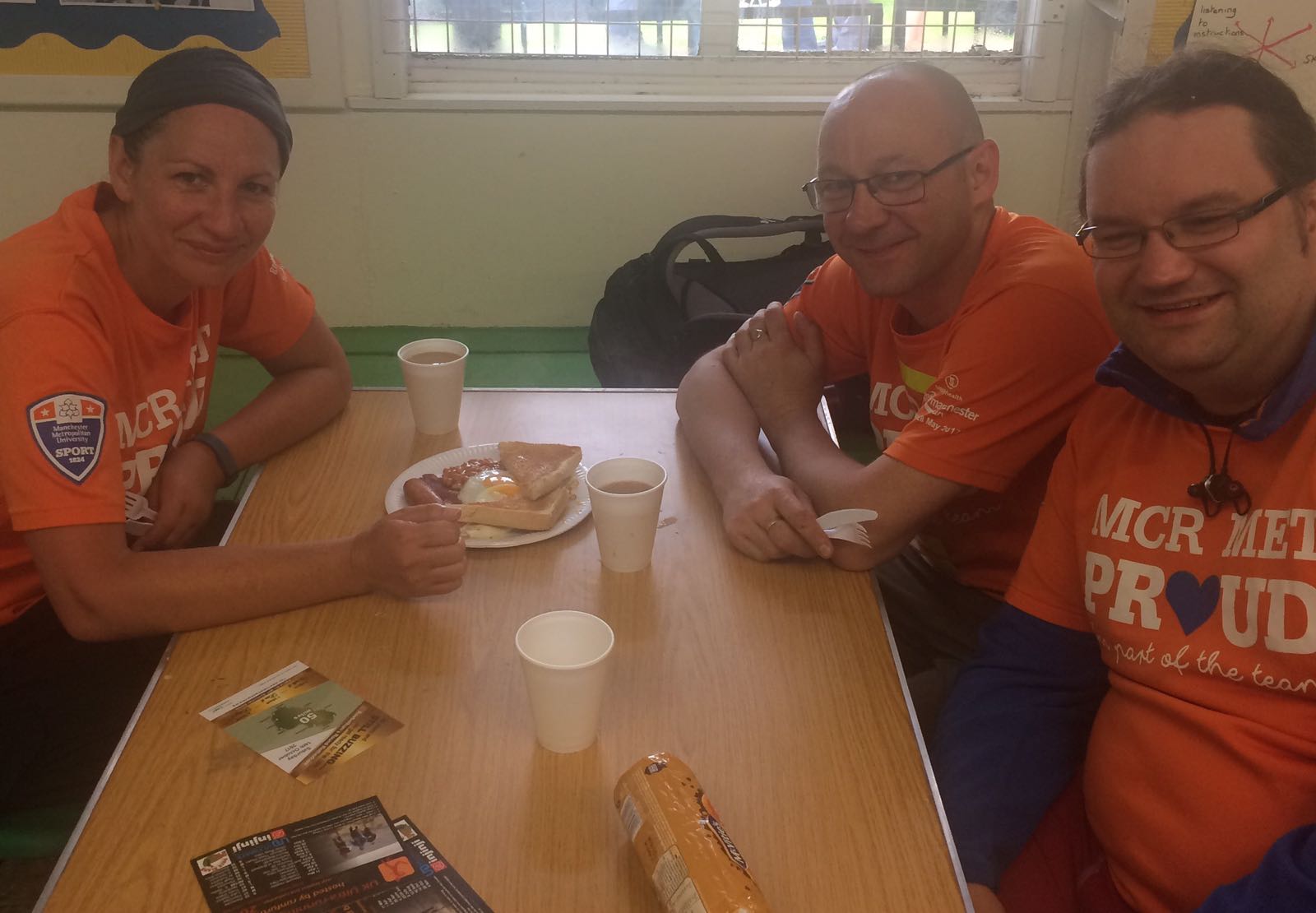 I'd like to give a special thanks to everyone who sent encouraging messages over the day and to Eleanor for coming to meet me at the end. It really did help at times - especially as I was reconsidering everytthing going up to Edale Cross - I came so close to bailing completely there... that I continued past there and all the way to Earl Sterndale is, frankly, astonishing to me.

So, where am I now... back home. resting... enduring aches and pains. Will I do it again? well... it's a thing now. It's a tempting thing to finish. It's also wrong and evil and to be avoided at all costs. In other words, keep your eyes peeled...

You can still sponsor Me (Albert Kennedy Trust and Medecins Sans Frontieres), Glenda (St. Benedict's Hospice, Sunderland) or Paul (Elliot's Footsteps). I'm still including the Rough Runner in October amongst my charity events, and I've set the fundraising window to last until the start of December. Thanks again to all those who have already sponsored any of us.

(* I forgot to turn my GPS on until 11 minutes in and forgot to turn it off until the minibus had done some manoeuvring when leaving Earl Sterndale - d'Oh!)